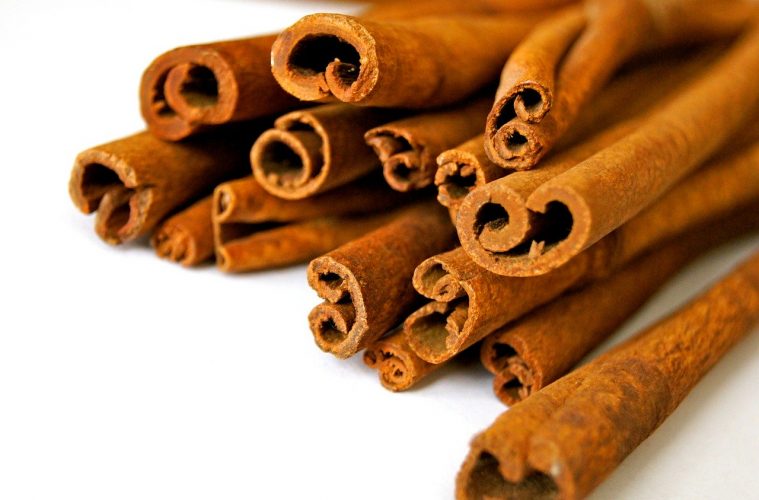 Cinnamon is a delicious spice that comes from the trees of Cinnamomum family.  It is native to Caribbean, South America and South-East Asia. It is the bark which can be found both in solid form and powdered form.

There are several varieties of cinnamon in use across the world however, dark coloured cinnamon is widely accepted in United States. Another popular variety of cinnamon is Ceylon cinnamon which highly regarded in South-Asian region.

Apart from culinary use, it has other medicinal properties that can be harvested. The medicinal use of cinnamon found its root in ancient Egypt (2000 BC) however it was also used for treatment of arthritis, coughing and sore throat during medieval period.

Studies suggests that it is very powerful antioxidant, antimicrobial, anti-inflammatory, anti-diabetic properties. It may prevent from other ailments such as cardiovascular diseases and cancer however more studies need to validate these claims.

Cinnamon have been proven helpful against varieties of ailments however, some have strong medical research validation, and some may require more research.

Some of the benefits of Cinnamon consumption are illustrated below:

Cinnamon is known for its antimicrobial properties, Cinnamon oil may help in prevention against certain fungi such as Candida, which affects blood stream. It may also protect against other microbial infections like bacterial and viral infections.

Cinnamon is loaded with antioxidants and is rich in highly important antioxidants polyphenol. It prevents our body against the damage caused by free radical. The expulsion of free radical is utmost important for the proper functioning of the body.

In a study carried out to test the antioxidants properties of 23 different herbs and spices out of which cinnamon is found to be more effective antioxidants compared to other spices. In antioxidant properties it can be compared with garlic and oregano.

Prolonged inflammation may cause tissue damage and result in severe health conditions. Cinnamon helps in fighting against any infections and repairs tissue damage. Due to its anti-inflammatory properties its being the important ingredient is majority of the spicy food prepared in South-Asian region.

Several studies claim that regular uses of cinnamon may prevent heart diseases however more studies need to be carried to validate these claims. Globally, the major cause of premature death is heart diseases which can be minimised using cinnamon.

The daily consumption of 1 gm of cinnamon or half a teaspoon may help in reducing important blood markers in type II diabetic patients.

Cinnamon have strong anti-diabetic properties which lowers the blood sugar by means of various mechanism.

It regulates the absorption of sugar from the food and its transference in the bloodstream. It is caused due to inference of cinnamon with other digestives enzymes which controls the metabolism of carbohydrates into sugar.

The second most important properties of cinnamon present on cells is to mimic like insulin and controls the production of insulin in the body. The regular use of cinnamon may lower the blood sugar by 10-12% as observed in several researches.

One of the studies carried out on Indian medicinal plants found out that cinnamon may help protect against HIV. Cinnamon bark, root, fruit and shoot have been experimented in laboratory to see the impact of cinnamon against HIV and results were very encouraging.

The studies show that it may be helpful against HIV however, the studies doesn’t claims that cinnamon consumption will prevent HIV.

Side Effects of Cinnamon

Although it helps against number of ailments it may have some side effects which we need to be aware of. It always better to have medical experts’ opinion before using Cinnamon against such disorders.

Cinnamon contains a substance called coumarin which is abundant in cassia however it is present in Ceylon cinnamon in trace amount.

The necessity of coumarin in our body is very limited however excessive intake of cinnamon may lead to liver toxicity and in severe case it can cause liver damage. If an individual has any liver disorders and taking medicines for the same, he/she needs to consult doctor before adding cinnamon to their diet.

Some people are allergic to cinnamon and cause symptoms like mouth sores, gum and tongue swelling, white patches when consumed in larger amounts.

Cinnamon contain a compound called cinnamaldehyde which creates allergic reactions when consumed in large quantities. However, it can only happen if you are allergic to cinnamon, but it may not cause any eminent threat.

However, it may have adverse effects on non-diabetic people if consumed in very large amount. An individual with normal blood sugar or slightly lower blood sugar may have deep impact of cinnamon consumption. It may restrict the body movement may cause paralysis.

Cinnamon contain the compound coumarin and its large intake may increase the risk of cancer. Since it is already known to cause liver damage and may result in liver cancer.

Animal studies have shown that impact of large coumarin intake may cause cancer and may alter the DNA over prolonged period of huge consumption. However, more studies needs to be carried out to establish this phenomenon on human being.

The key takeaway here from this is Cinnamon might help in some of the disorders however it may have some severe side effects. It always advisable to take medical opinion before inclusion of Cinnamon in our daily diet. “Eat Healthy Stay Healthy”.