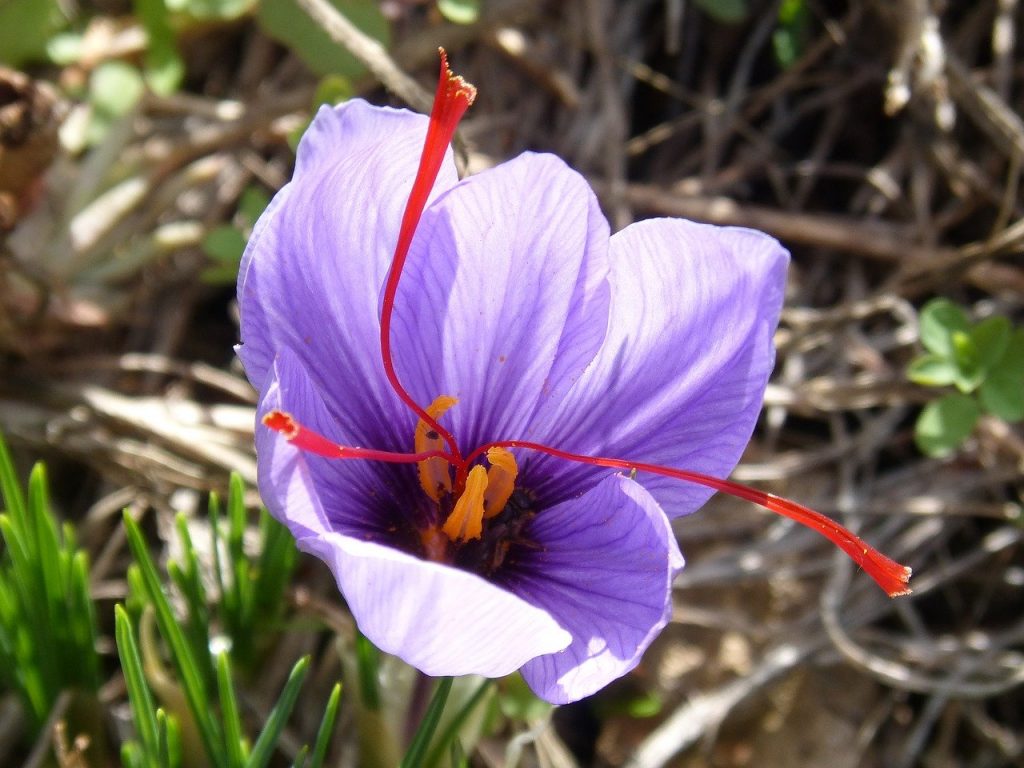 Saffron is one of the costliest spices in the world and its Kashmiri variant, the “Kashmiri Saffron” is the most expensive spice in the world. This variety is native to India and Pakistan that is rich in aroma and flavour.

Saffron which is also known as Crocus Sativus L. has been used as a medicinal plant in Ayurveda and naturopathy. The term saffron is derived from the Arabic word “Za’faran” which means “yellow”. (1)

Saffron is extracted as the stigma of the saffron flower which is native to tropical and subtropical regions. It is widely cultivated in Iran, Afghanistan, Turkey, the Mediterranean region, and India (Jammu & Kashmir). (2, 3)

However, the saffron produced by India is of the highest quality and most expensive among other varieties. Saffron is the most expensive spice across the world where 1 kg of it can cost you nearly 10,000 USD. (4)

What are the health benefits of Kashmiri Saffron?

More than 150 compounds are present in the stigma of saffron which includes major components like crocin, picrocrocin, and safranal. Due to its richness in varieties of compounds, it has been observed to be helpful in varieties of health conditions. (2, 3)

Saffron has been effective in the treatment of CVD, hypertension, metabolic disorders, dysmenorrhea, and cognitive impairments. In addition to this, it also has anti-inflammatory, anti-atherosclerotic, antigenotoxic, and cytotoxic properties. (2, 3)

A study for the effectiveness of saffron in the treatment of neurological disorders (2, 3) is in progress.

Here is a list of health benefits of consuming saffron.

The major risk factor of CVD includes overweight, obesity, hypertension, high blood pressure, hyperlipidemia, metabolic disorders, and diabetes. Over and above the genetic causes can’t be ruled out.

In recent studies carried out In-Vitro and Vivo found out the consumption of saffron helps in protection through modulation of oxidative stress, calcium artery-blocking effects, hypotensive and hypolipidemia properties.

Saffron is known to have rich in antioxidants which helps in removing chronic oxidative from the body otherwise it may cause several diseases such as cancer.

It is also a rich source of carotenoids which is known to have anti-cancer properties which help the body to fight against the onset of cancer.

The main oxidant presents in the saffron is crocin which is sensitive to chemotherapy. People who consumed saffron during their therapy had better results than placebo.

Saffron contains antioxidants such as crocin, picrocrocin and safranal, and kaempferol. Whereas the first three present in the stigma while the latter one in the flower petal.

Crocin and Picrocrocin are the important carotenoids that give saffron a unique colour. Both compounds have anti-depressants and anti-inflammatory properties that protect brain cell damage and improves metabolism and results in weight loss.

Safranal gives saffron the rich colour, taste, and aroma, which made it unique ingredients in the royal cuisines of Indian kings. Saffron in dishes is a representation of royal treatment.

The compound kaempferol has linked to an anti-depressant, anti-cancer, and anti-inflammatory properties.

The crocin and kaempferol present in the saffron have shown positive effects as an antidepressant as these compounds increase the mobility of the subjects both in the laboratory and clinical studies.

The saffron supplementation was able to improve the mood of the group of people than the others who didn’t have access to saffron. However, the effects of saffron petals were moderate in improving the mood.

Short-term administration of saffron (30 mg/day) to patients having major depressive disorder (MDD) has the same effect as the anti-depressant medicine ﬂuoxetine (40 mg/day).

However, some mild side effects were observed which suggests further investigation in this field.

In traditional medicine such as Ayurveda, saffron has been used as an herbal sedative, antispasmodic, aphrodisiac, diaphoretic, expectorant, stimulant, stomachic, anticatarrhal, eupeptic, gingival sedative, and emmenagogue.

Experimental studies have shown that saffron is effective in relieving the symptoms of premenstrual syndrome (PMS). After the administration of saffron, its effect was seen in cycles of 3 and 4 in the Total Premenstrual Daily Symptoms and Hamilton Depression Rating Scale which validates the efﬁcacy of C. Sativus in the treatment of PMS.

Traditionally, C. Sativus or saffron has been used in the treatment of many disorders which also includes its aphrodisiac properties. It is effective in increasing libido.

Due to its antidepressant and aphrodisiac properties, C. sativus is found to be very effective in people having antidepressant erectile dysfunction. It is also known to increase the sexual vitality in couples.

In Indian marriage, there is a tradition for newly married couples to drink saffron milk on their first night. It is believed that the consumption may help in improving the mood of the couple and increases their sexual vitality and experience.

The miraculous effects of saffron against neurodegenerative disorders such as Alzheimer’s and Parkinson’s diseases are under study.

Administration of saffron 30 mg/day (15 mg twice daily) has the same effect as the donepezil for the treatment of mild to moderate Alzheimer’s diseases with similar side effects except vomiting.

In Iranian folk medicine and Indian Ayurveda medicine, saffron has been used anticonvulsant herb. The experimental studies show similar effects on the rats however more studies are required to establish its effects on human beings.

The daily intake of 1.5 grams of saffron may not have any side effects

It can be observed that the side effects are associated with heavy dosages of saffron intake. To avoid these effects people should use a controlled amount of saffron in their diet.

The traditional uses in different medicine and modern experimental studies in In-Vitro and Vivo suggest the efficacy of saffron in the treatment of varieties of health conditions that may otherwise be thought to be untreatable. It does have several health benefits along with some side effects associated with a large daily intake. Due to its versatility of use, it is considered the most expensive spice in the world. “Eat Healthily, Stay Healthy”.

How Can You Reduce the Risk of Neurodegenerative Disorders

Are you Diabetic? Try these 7 Healthy & Delicious Breakfast Recipes